Early appointment of counsel and the Constitution – ABA Principle 3 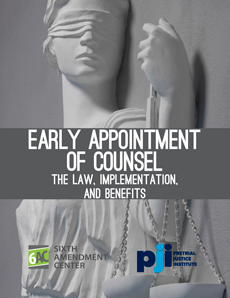 In the more than 50 years since the U.S. Supreme Court first declared access to counsel in criminal cases “fundamental and essential” to fair trials, the Court has similarly held that the “Sixth Amendment guarantees a defendant the right to have counsel present at all ‘critical’ stages of the criminal proceedings,” including those that occur before trial. What remains an open question is the precise moment in a criminal prosecution when counsel must be appointed to an indigent defendant in order to fulfill the promise of the Sixth Amendment.

A jointly issued paper of The Pretrial Justice Institute and the Sixth Amendment Center, Early Appointment of Counsel: The Law, Implementation, and Benefits, concludes that the justice goals of the criminal court systems will be best served where every indigent defendant has appointed counsel from the earliest moment that the indigent defense system learns the defendant is being investigated, has received a summons to appear, is arrested, or has a charging document filed against him.

The paper explains current U.S. Supreme Court case law and explores how some jurisdictions have successfully applied that law by providing access to counsel at the defendant’s initial appearance before a judicial officer following arrest.