In 1981, the United States Supreme Court determined in Polk County v. Dodson that states have a “constitutional obligation to respect the professional independence of the public defenders whom it engages.”  Observing that “a defense lawyer best serves the public not by acting on the State’s behalf or in concert with it, but rather by advancing the undivided interests of the client,” the Court concluded in Polk County that a “public defender is not amenable to administrative direction in the same sense as other state employees.”

Independence of the defense function is especially necessary to prevent undue judicial interference.  As far back as the Scottsboro Boys’ case of Powell v. Alabama, the U.S. Supreme Court has been on record in questioning the efficacy of judicial oversight and supervision of right to counsel services, asking: “[H]ow can a judge, whose functions are purely judicial, effectively discharge the obligations of counsel for the accused?  He can and should see to it that, in the proceedings before the court, the accused shall be dealt with justly and fairly.  He cannot investigate the facts, advise and direct the defense, or participate in those necessary conferences between counsel and accused which sometimes partake of the inviolable character of the confessional.” 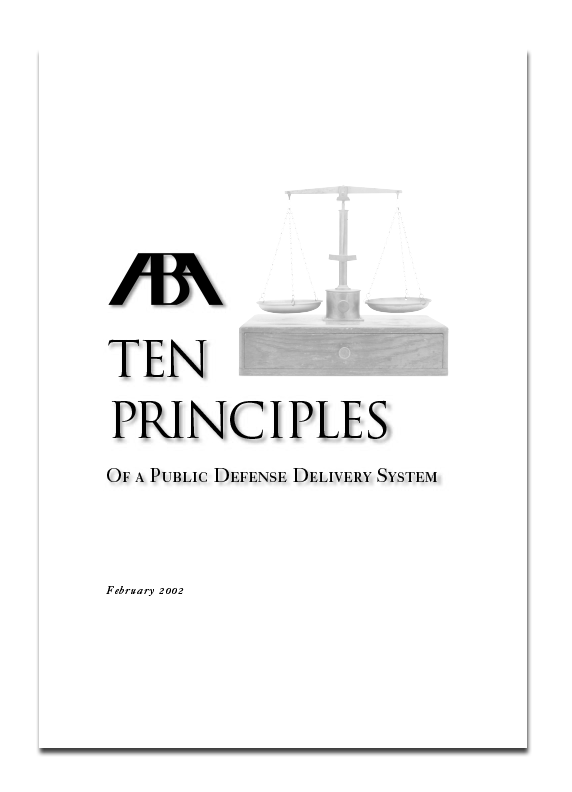 National standards of justice reflect the aims of the U.S. Supreme Court.  In 2002, the American Bar Association (ABA), House of Delegates adopted the Ten Principles of a Public Defense Delivery System, noting that the Principles “constitute the fundamental criteria necessary to design a system that provides effective, efficient, high quality, ethical, conflict-free legal representation for criminal defendants who are unable to afford an attorney.”  In 2012, U.S. Attorney General Eric Holder remarked that the ABA “literally set the standard” for indigent defense systems with the promulgation of the Ten Principles.

The first of the ABA Ten Principles explicitly states that the “public defense function, including the selection, funding, and payment of the defense counsel, is independent.”  In the commentary to this standard, the ABA notes that the public defense function “should be independent from political influence and subject to judicial supervision only in the same manner and to the same extent as retained counsel” noting specifically that “[r]emoving oversight from the judiciary ensures judicial independence from undue political pressures and is an important means of furthering the independence of public defense.”

Independence of the defense function is the first of the ABA Principles because without it, most of the other ABA Principles are unobtainable.  Let’s say a county executive, for example, calls for all county departments to take a 10% cut.  The problem is that, unlike other aspects of the criminal justice system, public defenders are constitutionally required to defend all people appointed to them from the court.  The defense practitioners do not control their own workload.  Therefore a 10% budget cut is impossible to implement if it is not met by a 10% cut in workload – at least it is impossible if one is concerned about maintaining parameters of ethical representation.  But, despite the ethical considerations, the public defender that is a direct county (or state) executive appointee is likely to cut 10% rather than risk being replaced by someone who will do what the executive says.

Fearing the loss of their jobs by not pleasing the judge or the county/state executive who hired them, defenders will take on more cases than they can ethically handle (in violation of Principle 5), will delay working on a case (in violation of Principle 3), will triage their hours available in favor of some clients, but to the detriment of others, thereby failing to meet the parameters of ethical representation owed to all clients (Principle 10), and will agree to work under low-bid, flat fee contracts (Principle 8).

ABA Principle 1 commentary specifically recommends that in order to “safeguard independence and to promote the efficiency and quality of services, a nonpartisan board should oversee defender, assigned counsel, or contract systems.”  Footnotes to ABA Principle 1 refer to National Study Commission on Defense Services’ (NSC) Guidelines for Legal Defense Systems in the United States (1976).  The Guidelines were created in consultation with the United States Department of Justice (DOJ) under a DOJ Law Enforcement Assistance Administration (LEAA) grant.  NSC Guideline 2.10 (The Defender Commission) states that “a special Defender Commission should be established for every defender system, whether public or private,” and that the primary consideration of appointing authorities should be “ensuring the independence of the Defender Director.”