Posted on March 16, 2016 by David Carroll Posted in Pleading the Sixth

Pleading the Sixth: In these days of political strife and partisan antagonism, it is encouraging to see that government can still work and reach consensus for the benefit of the people, as demonstrated by the near unanimous passage of a comprehensive indigent defense reform bill in Utah. Part I of this report explains the new reforms and the consensus approach from which other states can learn. Part II explains the historical underpinnings of Utah’s courts that give us optimism for the right to counsel in Utah and offers lessons for achieving the best paradigm of justice everywhere.

“We are pleased with the passage of SB 155, establishing a state-level Indigent Defense Commission in Utah,” announced Chief Justice Matthew Durrant upon notification that an indigent defense reform bill passed the Senate on March 9, 2016 on a concurrence vote of 26-0-3 after passing the House earlier in the day on a vote of 74-1-0. “This is a positive first step in a process aimed at strengthening the constitutional right to counsel for indigent criminal defendants,” Justice Durrant continued, “I commend and thank the legislature.”

SB 155 seeks to address the fundamental problems identified in the Sixth Amendment Center’s (6AC) report, The Right to Counsel in Utah: An Assessment of Trial-Level Indigent Defense Services. Namely, Utah’s trial courts currently do not uniformly provide counsel to indigent defendants at all critical stages of criminal cases as required by the U.S. Supreme Court, with many defendants – particularly those facing misdemeanor charges in justice courts – never speaking to an attorney. Those defendants that do receive representation too often receive an attorney who operates under multiple conflicts of interest arising from unfair contractual arrangements that produce incentives to curtail zealous representation. The challenge of providing effective representation for each client can be exacerbated by an excessive caseload that reduces the time a lawyer can spend on an individual case. And, these attorneys generally lack appropriate independence from undue state and local governmental interference with securing the necessary resources to put the state’s case to the test. The primary cause of the institutionalization of these practices is the lack of accountability inherent in the system. 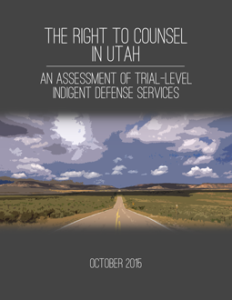 Most states eliminate the potential for direct governmental interference with the right to counsel by establishing an independent commission to oversee the defense function. Following the recommendations of nationally recognized standards of justice, such states achieve constitutionally mandated independence by insulating right to counsel services under a board made up of members selected by diverse appointing authorities, such that no single branch of government has the ability to usurp power over the system.

The prevailing standards are the American Bar Association’s Ten Principles of a Public Defense Delivery System. Adopted by the ABA House of Delegates in 2002, the ABA Ten Principles are self-described as constituting “the fundamental criteria necessary to design a system that provides effective, efficient, high quality, ethical, conflict-free legal representation for criminal defendants who are unable to afford an attorney.”

The first of the ABA Principles requires that the public defense function, including the selection, funding, and payment of defense counsel, be “independent.” Commentary on Principle 1 states that the defense function must be insulated from outside political or judicial interference by a board or commission appointed from diverse authorities, so that no one branch of government can exert more control over the system than any others. Footnotes then refer to National Study Commission on Defense Services’ Guidelines for Legal Defense Systems in the United States (1976). The Guidelines were created in consultation with the United States Department of Justice (DOJ) under a DOJ Law Enforcement Assistance Administration (LEAA) grant. NSC Guideline 2.10 (The Defender Commission) states in part:

SB 155 accordingly creates the new Utah Indigent Defense Commission (UIDC) made up of members appointed from diverse appointing authorities. Specifically, the Utah commission is composed of 11 voting and two ex officio nonvoting members. The governor, with the consent of the Senate, appoints nine members recommended by the following:

The Utah Judicial Council and the Commission on Criminal and Juvenile Justice (UCCJJ) appoint the remaining two voting members. The Utah Judicial Council – a 14-member body of the judicial branch charged with the promulgation of uniform rules and standards to ensure the proper administration of justice across the state – directly appoints a retired judge to the UIDC. The Executive Director of the UCCJJ, or his designee, also serves on the UIDC. The UCCJJ is a governmental entity made up of 22 criminal justice stakeholders created to achieve broad philosophical agreement concerning the objectives of the criminal justice system. Finally, the two non-voting members of the new commission are a representative from the Administrative Office of Courts (appointed by the Judicial Council) and the Executive Director of the UIDC itself.

B. UIDC Powers and Duties

The principal duty of the UIDC is to adopt guiding principles for the oversight and assessment of public criminal defense services that address the following:

The UIDC is additionally charged with ensuring that service providers are adequately compensated and to develop data collection procedures to ensure uniformity from jurisdiction to jurisdiction regarding attorney performance. The UIDC has express statutory authority to accomplish these aims, along with the authority to review, investigate, and enforce UIDC standards on local systems.

As the sponsor of the bill, Senator Todd Weiler (R), said, “Utah took a major step forward with the passage of SB 155. For the first time, the state will make a meaningful effort to ensure its Sixth Amendment obligations are being met in all 29 counties.”

Sen. Weiler also notes that “the legislature will be providing grants or matching funds for the first time to help offset the costs for local politician subdivisions.” That is, SB 155 includes the first ever state funding of trial-level public defense services in Utah (isolating Pennsylvania as the only state in America with no state funding of the constitutional right to counsel). UIDC is statutorily required to develop policies and procedures for how best to disseminate these new monies. However, it is important to note that all local governments are bound by UIDC standards whether they seek state funding or not.

Although some local advocates were discouraged that SB 155’s state funding was reduced from the proposed year one budget of $3 million to $2 million, the funding reflects the anticipated time it will necessarily take to get the UIDC up and running. Upon the signing of SB 155 by the Governor, the act will take effect in May 2016. It will then take several months for nominating authorities to make recommendations to the Governor, for the Governor to make appointments and the Senate to consent, and for the UIDC to set meetings. From there, the UIDC will have to advertise for the position of Executive Director, interview candidates, and make a hire. The Executive Director will necessarily then have to go through a similar process to hire staff while assisting the UIDC to develop policies and procedures for the dissemination of state money.

As noted in the March 9, 2016 Salt Lake Tribune, Weiler promised that “if this bill passes and I’m re-elected, I will be back next year with a lot of changes, and asking for money, [b]ecause it’s that big of a problem and we can’t fix it in a year.”

The consensus approach: How Utah managed to pass significant reform

The manner by which you get a nearly unanimous vote on significant indigent defense reform is perhaps best summed up by Kelley Wright of the Utah Statewide Association of Prosecutors: “This was a collaborative process of fair minded individuals representing strategic stakeholders that came together to address an important constitutional right. Our Utah prosecutors recognize that our criminal justice system works best when defendants are represented by competent and effective defense counsel. … We joined in and supported the work of the committees appointed by Utah’s judiciary to review indigent defense in Utah.”

The reform process began back in 2008 when the Utah Judicial Council created a Study Committee on Appellate Representation of Indigent Criminal Defendants to examine the delivery of right to counsel services in appeals. Its January 2011 report determined, among other things, that the prevailing use of flat fee contracts created significant financial and ethical hurdles to quality appellate representation. Recognizing that some of the identified appellate issues may be exacerbated by similar contracts at the trial level, the Judicial Council reconstituted the appellate committee to look at trial-level services and included representatives from the judiciary, the executive branch, the legislature, the attorney general’s office, the prosecuting attorneys’ association, the criminal defense bar, and the association of counties, among others. The study committee retained the services of the 6AC through a generous grant by the U.S. Department of Justice, Bureau of Justice Assistance.

Rather than playing “gotcha” politics, the 6AC recognized early on that the problems with the right to counsel were so complex in Utah that it was best to present issues to the committee even while a ten-county evaluation was still being completed. This allowed the diverse stakeholder group to debate the underlying problems and begin thinking of solutions all throughout the evaluation process. Indeed, the insights of prosecutors and local governments were incredibly helpful to the 6AC in understanding the systems assessed.

Upon receipt of the draft report, the study committee requested that they be allowed to work over the summer of 2015 to develop Utah specific answers to the problems. Because of the consensus approach Utah was taking and the seriousness and respect with which the study committee did their work, the 6AC heeded the request such that the report and solutions adopted by the Judicial Council could be presented at the same time the report was released. From there, Sen. Weiler took the lead in drafting SB 155 with continued input from all of the stakeholders.

Though no bill is perfect, SB 155 is an important first step in rectifying Utah’s indigent defense deficiencies. As Adam Trupp of the Utah Association of Counties states, “We are pleased that the state legislature passed a bill that both recognizes the need for improving our public defender system in the state and the responsibility the State has for ensuring delivery of quality legal services. The legislation is only a step forward in that process and we have a lot of work ahead of us still in the process of improving representation and resources. The most positive step in our opinion is that the legislation, and the discussion that led to its passage, both indicate the understanding in the executive and legislative branches that the state must be involved in both identifying needs and funding improvements.”

Click here to go to Part II of this report.