Why our misdemeanor courts are filled with uncounselled defendants

Posted on May 12, 2015 by David Carroll Posted in Pleading the Sixth

Pleading the Sixth: On the eve of Senate Judiciary Committee hearings on the denial of counsel in our nation’s lower courts, here are four reasons people accused of misdemeanors go to jail everyday without speaking to a lawyer, and four reasons no one is doing anything about it. 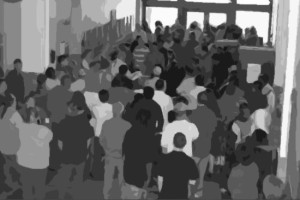 Under the U.S. Constitution, governments are barred from incarcerating a poor person accused of crime unless the indigent accused is given the services of a competent lawyer. This right to counsel extends to less serious misdemeanors even if the threat of jail is only for a single day. Despite this, Senator Chuck Grassley (R-IA) recently said, “states and localities regularly fail to comply with this requirement.” Further still, Sen. Grassley noted, “potentially innocent individuals plead guilty to crimes,” and then accrue “a criminal record which causes them adverse consequences including difficulty finding a job and a greater criminal history that would be considered in any future sentencing determination.” Accordingly, Sen. Grassley has called for the first ever U.S. Senate Judiciary Committee hearing on the denial of counsel in misdemeanor courts on May 13, 2015.

In advance of that hearing, here are the top four reasons thousands of people going to jail everyday in America without ever speaking to a lawyer:

Why our misdemeanor courts are filled with unrepresented defendants

1. Courts take jail “off the table” – except that they really don’t!

Misdemeanor judges often err in concluding that, so long as there is no imminent threat of jail time, the court does not have to appoint counsel to the accused. In these cases, judges often tell a defendant that he does not get a lawyer because, if he is found guilty, he will only receive a “suspended” jail sentence. That is, the defendant will be given only the potential of serving time in jail term but will remain at liberty post-conviction so long as the defendant completes any duties or pay any fees imposed by the court. Yet, if the defendant does not complete the terms of his probation, he can be re-arrested and brought to answer before the court. If determined to have broken his probation, the defendant’s liberty can be revoked and he will be sent to jail.

In 2002, the U.S. Supreme Court prohibited this very practice stating: “A suspended sentence is a prison term imposed for the offense of conviction. Once the prison term is triggered, the defendant is incarcerated not for the probation violation, but for the underlying offense.” In other words, there is no opportunity in a probation revocation hearing for that lawyer to go back to the trial phase to challenge the government’s case on the original accusations – the accusations that, after all, the defendant had already faced without the assistance of counsel.

2. Courts tell defendants: “the right to counsel is not free”

If a poor person is told that she can get a lawyer, but that she will have to repay the government for part or all of the cost of that representation, chances are high that she will forgo an attorney rather than incurring the debt.

Sometimes this threat of financial sanction is overt. A 2010 National Legal Aid & Defender Association (NLADA) report on the right to counsel in Idaho notes that defendants entering the courthouse in Nez Perce County, for example, are greeted by a sign stating: “If you apply for a Public Defender and the service is granted to you IT IS NOT FREE!”

But, more likely, the financial chilling of the right to counsel is subtler. Some jurisdictions simply add the cost of counsel to the list of fines and fees a defendant must pay at the end of the case. And, if the jurisdiction regularly incarcerates people for failing to pay these fees, the indigent community quickly learns not to seek counsel or face the potential of eventually being jailed for evoking that right. A 2008 NLADA report on indigent defense in Michigan notes that in Jackson County, the imposition of a $240 charge for all misdemeanor representation results in 95% of defendants waiving counsel and 50% of them pleading guilty at first appearance.

3. Defendants are pressured into guilty pleas

Following their arrest, most people are brought to a police station or detention center for processing. At some point thereafter the defendant is likely brought before a judicial officer to determine whether or not he should be released pending further court action. In 2008, the U.S. Supreme Court determined that the right to counsel attaches the first time a defendant is brought before a judge or magistrate. From that point forward, a court cannot proceed with a critical stage of the case without offering counsel to the poor defendant. (The 6AC wrote a whole report on these requirements, available here.)

Despite this, prosecutors often interfere with that right to counsel process. If the defendant is out of jail pre-trial he may be required to meet with a prosecutor before getting his constitutionally guaranteed lawyer, or more likely, enter a guilty plea without ever getting that lawyer at all. For example, a Sixth Amendment Center report details how one misdemeanor court in Delaware asks defendants appearing for arraignment to wait in one of two lines based alphabetically on last name. After standing in line, the first person a defendant encounters is not a public defender, but a prosecutor seeking to make a plea deal. On an average day during out site visits, these two lines totaled approximately 200 individuals. Not surprisingly, more than 75 percent of misdemeanor defendants in Delaware proceed through the Court of Common Pleas without ever having spoken to a lawyer.

4. Courts fail to ensure that a defendant’s choice to proceed without a lawyer was an intelligent and knowing choice (as required by the Constitution)

If a defendant is unable to make bail and remains in jail prior to his next court date, prosecutors may offer the defendant a chance to get out of jail for time served if the accused simply pleads guilty. Of course, the defendant may jump at the opportunity to get out of jail. He may want to get back to family, or he might be afraid of losing his job. But he may not be aware of valid defenses he loses by taking the quick plea deal. That is why courts are constitutionally required to make individualized inquiries to determine if defendants are intelligently waiving their right to counsel.

Some misdemeanor court judges, however, attempt to determine the validity of such waivers of the right to counsel simply by asking defendants: “Do you make this decision knowingly, voluntarily, and intelligently?” But offloading this standard on the defendant to make a determination for herself cannot meet the constitutional threshold. After all, if the defendant is, in fact, not capable of making an intelligent choice with respect to his constitutional rights, how then could he intelligently respond to a judge’s question?

Why these problems have persisted for so long

Though tens of thousands of people go to jail each year without the aid of a lawyer, this crisis is in many ways invisible for the following four reasons:

1. Appellate systems do not work to rectify actual denials of counsel

Many misdemeanor courts are not courts of record. This means that there literally is no recording of what is occurring in these courts. This means that there is no official record from which a case can be appealed. Instead, defendants have a right to a “do over” at a higher court (known as a de novo appeal). But, without counsel to advise them of this procedure, poor defendants simply do not know how to get a higher court to take a second look. Further still, while a “do over” might change the outcome in some cases, it can never change the underlying systemic flaws that resulted in faulty convictions in the first place.

In Gideon v. Wainwright, the Supreme Court made the provision of indigent defense services a state obligation through the Fourteenth Amendment. Though it is not believed to be unconstitutional for a state to delegate its constitutional responsibilities to its counties and cities, in doing so the state must guarantee that local governments are not only capable of providing adequate rep­resentation, but that they are in fact doing so. A number of states have no institutional presence to begin to assess whether its constitutional obligations under the Sixth and Fourteenth Amendments are being met at the local level, including: Arizona, California, Illinois, Mississippi, Nebraska, Nevada, Pennsylvania, South Dakota, Utah and Washington.

3. The crisis is beyond the reach of institutional public defense systems

Other states have constructed state-funded, state-administered indigent defense systems. However, many of these systems only provide misdemeanor representation in state court cases. If the state allows local government to pass local ordinances that carry jail sentences and to prosecute them in municipal courts, state public defender systems generally have no authority to ensure that poor people facing the threat of jail in these local courts are adequately defended.

For example, Colorado has an indigent defense system that, on paper, is generally regarded as one of the more structurally sound systems in the country. The Office of the State Public Defender (OSPD) provides services in all state criminal cases with the state-funded Office of Alternate Counsel providing representation on case in which the OSPD has a conflict. However, municipalities are on the hook for the cost of public defense services for local code violations carrying jail time. Each municipality could opt to use the OSPD, but with each having to pick up the tab, none of them do. Instead, each locality provides services as they see fit, with only Denver and Aurora having established municipal defenders – the rest of the state’s municipal courts have no institutional oversight.

4. No one is required to report how many people face misdemeanor charges without counsel

Despite the advancements in technology over the past decade, most courts simply do not track the number of people going without counsel. For example, Illinois does not have a centralized court case management system. The Administrative Office of Courts (AOC) must rely on each of the state’s 102 counties to self-report statistics despite non-uniform case management systems and reporting capabilities. Since the AOC does not require data on uncounselled defendants, the local counties do not track such data. It is hard to define the scale of the misdemeanor crisis if our state courts have limited means to track the relevant data points.

Tagged with: denial of right to counsel, misdemeanors