Wisconsin lawyers appointed to represent the accused have significant financial conflicts imposed upon them by the state. The evidence suggests financial considerations may have trumped the constitutional imperative for independent, conflict-free public defense services. As a result, Wisconsin’s ability to provide constitutional right to counsel services is undermined.

These are the core findings of the Sixth Amendment Center’s May 2015 report, Justice Shortchanged: Assigned Counsel Compensation in Wisconsin. The study, commissioned by the Wisconsin Association of Criminal Defense Lawyers, sought to achieve two broad aims: 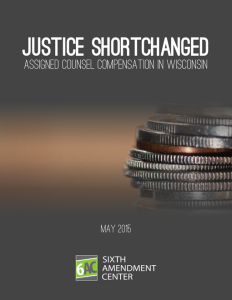 Indeed, that Wisconsin’s compensation rate for Sixth Amendment lawyers is the lowest in any state in the country is undisputed. Attorneys defending the indigent accused are paid $40 per hour, a rate that has not changed in 20 years — since 1995 when the Wisconsin legislature reduced the rate from $50 per hour. Although $40 per hour may sound like a decent wage to some, Justice Shortchanged demonstrates that for the average lawyer $40 per hour is not enough even to pay for basic overhead expenses like office rent and utilities. There is nothing left each month for the lawyer’s salary.

Making matters worse, the state public defender agency recently shifted in some counties toward paying private lawyers a flat fee for public defense services. But flat fee contracts invariably produce financial incentives for appointed lawyers to triage work in favor of some defendants, to the detriment of others.

The report demonstrates that unreasonable compensation rates and flat fee contractual arrangements to represent the poor in criminal courts are constitutional violations  because each pits the attorney’s financial well-being against the client’s right to conflict-free representation. As a result, lawyers are pushed to consider how to make assigned representation profitable in addition to, and potentially in opposition to, the stated interest of the client. The financial conflicts involved can and do interfere with a lawyers’ ethical obligation to give undivided loyalty to each and every defendant.

The 6AC worked in conjunction with the Defender Initiative of the Fred T. Korematsu Center for Law and Equality at Seattle University School of Law (SUSL Defender Initiative) to research this project. The SUSL Defender Initiative is a law school-based project aimed at providing better representation for people accused of crimes through a unified vision that combines research, advocacy, and education. The 6AC/SUSL partnership is generously supported by the U.S. Department of Justice, Bureau of Justice Assistance.

Justice Shortchanged: Assigned Counsel Compensation in Wisconsin (May 2015), is available from the Sixth Amendment Center in electronic format only.